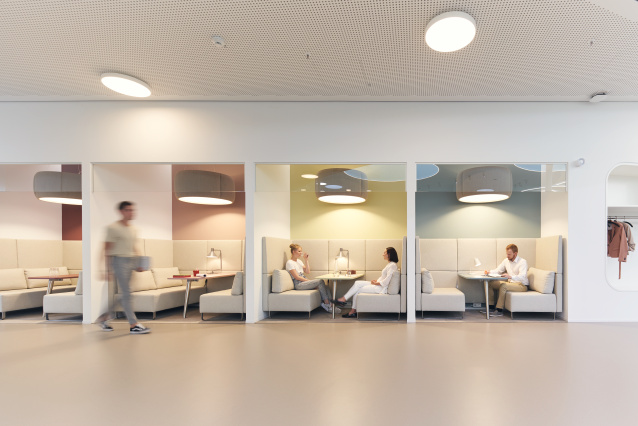 A new and simple approach to wellbeing is reshaping the office

Arguably, no workplace subject is more talked about than wellbeing. This is understandable, given the ways work can affect our wellbeing for good or bad and the fact that the subject embraces a wide range of issue and disciplines. Our general wellbeing is defined by our physical and mental health, our relationships (both in the office and out of it), our sense of purpose, our identity and our levels of happiness.In turn it is a subject explored constantly by management theorists, neuroscientists, physiologists, philosophers, anthropologists and artists and others, whose ideas and findings are then endlessly chewed over by politicians, commentators, managers and each one of us.

One point that seems indisputable is that our particular preoccupation with wellbeing is recent. People have pondered the issue for Millennia but it is only the past 50 or so years that we’ve really absorbed ourselves in its complexities. This is not coincidentally because our lives have become more complex and our work more sedentary and technologically focussed.

Whereas Ancient Greek philosophers and their descendants may have speculated on the roads to happiness and wellbeing; while Victorian philanthropists acted on them for the first time in a structured way in a work context; and the early organisational and motivational researchers of the mid 20th Century may have furnished us with models and ideas that we still use, they were all doing so at a time when work and lives were not as they now are.

We remain on a learning curve about how to address wellbeing in this era, but there is no doubt that we know more about it than ever before. We understand many of the factors that affect our wellbeing and the steps we can take to address them in the way we design offices, create organisational cultures and encourage people to address them in their lives both at work and elsewhere.

Crucially, as organisations depend more and more on the skills and knowledge of people for their competitive advantage and growth, so too are they increasingly concerned about the wellbeing of individuals. They may not have a magic wand to deal with the issue completely, but they do have more awareness and a growing number of tools to help them both understand and address the challenges and opportunities of wellbeing.

There are signs that things are changing on a practical in response to calls like that from the CIPD. The number of UK organisations with wellbeing strategies has increased by 130 percent since 2016, with over two thirds of employers saying they now have a formal plan in place, according to the Employee Wellbeing Research Report 2019 published by the Employee Rewards and Benefits Association and AXA PPP Healthcare. The report claims that 68.4 percent of employers now have a dedicated wellbeing strategy.

According to the report, in 2018 fewer than half (45 percent) of organisations had implemented a wellbeing plan and in 2016 fewer than a third (30 percent). This means uptake of employee wellbeing strategies over three years has risen significantly – by 130 percent. Of the 47 percent of employers without a strategy in place, 81 percent said they are planning to introduce one either this year or at some point in the next few years.

More than two thirds (67.6 percent) of firms in the private sector now have a dedicated wellbeing strategy, while more than three quarters (77.5 percent) of public sector organisations have a strategy in place.

Governments are also waking up to the benefits of addressing wellbeing as a measure of success rather than just GDP. The New Zealand government has unveiled its plans to release billions of NZ dollars for mental health services and other issues related to quality of life. In the UK, noises have also been made in this direction. Earlier in 2019, the Office for National Statistics began publishing bulletins outlining measures of wellbeing. The UK may not have made the issue a cornerstone of economic policy yet, but that may be a matter of time.

It should go without saying that the office environment plays an essential role in the wellbeing of workers. And yet still we debate about an issue that we have understood for several decades. One of the defining pieces of research looking at the link between workplace design and wellbeing and productivity is Adrian Leaman and Bill Bordass’s game changing study into the ‘killer variables’ that make the most difference. In no particular order they are:

It is no coincidence that these align to a very large extent with the findings of other researchers including Nigel Oseland and also the book The Elemental Workplace by the former Workplace Director of Sky and now consultant and entrepreneur Neil Usher, which defines twelve variables for the creation of a fantastic workplace.

When we examine each of these variables or elements, the thing that is most striking is how comparatively straightforward they are. They address our most basic needs, we understand them instinctively and the solutions involved are neither onerous nor difficult to grasp. They do not rely on gimmicks but instead on well designed spaces and products that offer people comfort and control while meeting our primal needs for solidarity, meaning, air, sunlight and nature. Is that too much to ask?