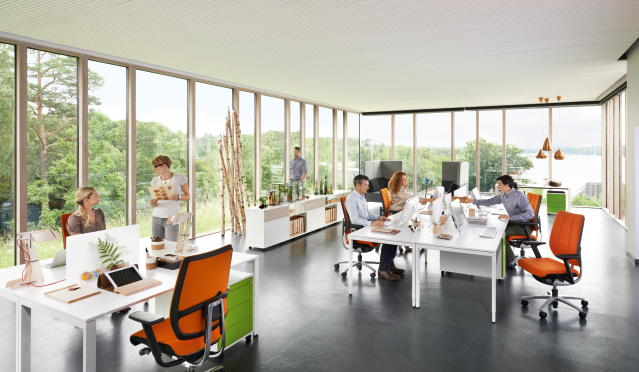 Feeling blue about work? We know the answer to that

Monday 20 January is ‘officially’ Blue Monday in the UK, ‘officially’ the most depressing day of the year for people at work. The anniversary is always met with a great deal of scepticism, largely because it is the brainchild of Sky’s marketing department who came up with the idea to publicise the Travel Channel in 2005. Much of the scepticism centres on the use of an equation to determine that Blue Monday should fall on the third Monday of January. But there is some method in this, based as it is on genuine factors such as the amount of time people are able to enjoy daylight.

Blue Monday is perhaps especially poignant this year because of the announcement by Pantone that it’s colour of the year is something called Classic Blue. It too is linked to an absence of daylight and a degree of uncertainty.

“It’s a colour that anticipates what’s going to happen next,” said Laurie Pressman, the vice president of the Pantone Color Institute, which selects the Color of the Year. “What’s the future going to bring as we move into the evening hours?” (You’ll have to forgive the mishmash of English and American spellings.)

What we do know is that colour plays an important role in the way we feel about our lives and our surroundings which is why some colours are so closely associated with specific emotions and why it’s so important to make informed choices about colour.

Here in the UK we are slap bang in the middle of the British Winter, which usually means cold, damp and dark. There’s little doubt that this time of the year can get on top of people a little bit, leaving them feeling blue and that one of the most widely recognised causes of this is seasonal affective disorder (SAD), which is directly linked to the lack of natural light we experience during the course of the day.

SAD is a term was coined by Dr. Normal Rosenthal at Georgetown University to describe winter blues: the lethargy and generally downbeat feelings we experience when the weather, low sun and shorter days force people to spend more time indoors with less exposure to natural light.

SAD can affect each of us in different ways and to varying degrees but it is a common condition linked to the functioning of a part of our brain called the hypothalamus which controls our moods, appetite and sleep patterns. Lack of light affects us by interfering in the production of feel good hormone serotonin and disrupts the melatonin hormone and circadian rhythms that regulate our sleep.

Higher levels of serotonin correlate with better mood and feelings of satisfaction and calmness, and lower levels link to depression and anxiety. Many antidepressants work by boosting levels of serotonin and it’s also why a walk in the sunshine can lift our spirits so profoundly.

Shining a light on the problem

We’re still learning about the mechanisms of SAD, but even as we develop our understanding have complicated things with the introduction of another form of light into our lives that can disrupt the way we function just as much as a lack of sunshine. Smartphones and tablets now fix us with their cyclops gaze for most of the day and the light they emit is having just as profound an impact on our wellbeing as a dearth of daylight.

Research published by IDC and others found that 80 percent of smartphone users check their phone within 15 minutes of waking each day and two thirds keep it by their side for a minimum 23 hours a day. Nearly all of those surveyed (95 percent) claim they now routinely use some form of electronic device in the hour before they go to bed.

Unfortunately, this light exposure suppresses the production of melatonin, which not only means restless nights but also an increased risk of cancer, impaired immune system function, type 2 diabetes, obesity, and heart disease. The main culprit here is the backlit blue light emitted by televisions, tablets, computer screens and smartphones which seems to have a particular influence on our levels of melatonin and hence our sleep patterns.

Our 24/7 use of electronic devices has both physical and psychological consequences and, we would argue, is directly linked to the rise in both musculoskeletal disorders and stress and depression which are far and away the most common workplace related illnesses in the UK. Of course, the effects of our need to use these devices couple with more flexible working patterns can be mitigated or even eradicated by intelligent workplace design and good working practices, but we should never forget that all of them are supplied with a factory-installed feature called the off switch that can improve our wellness if we use it in the right way and at the right time.

When it comes to the blues and the role of natural light, there are inevitable consequences for architecture, office design and working culture. As we have highlighted before, daylight is essential for our wellbeing and productivity and it is vital that we have access to it all year round, and not just in the depths of Winter and when we are asked to focus on it on a particular day.