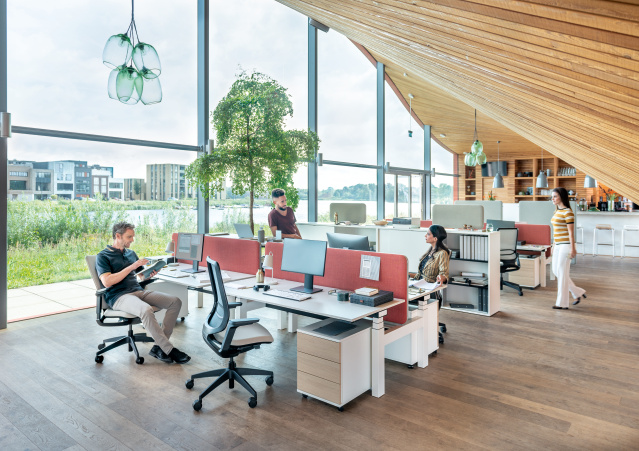 Is salutogenic design the next big issue for the workplace?

A number of progressive workplace issues have crossed into mainstream thinking over the past few years, and perhaps none more so than biophilia. It is now a principle that has become an issue talked about in the mass media, as shown by a recent CNN interview with one of Europe’s leading proponents of biophilic design Oliver Heath. The interview explores how biophilia taps into our embedded love of nature to evoke certain behaviours and emotions.

In turn this mainstream interest in biophilia is a sign of how organisations are looking at sophisticated ways of meeting a number of interrelated business challenges, not least engaging with employees and looking after their wellbeing while improving productivity. Biophilic design has shown itself to have a number of demonstrably beneficial outcomes in this regard, both anecdotally and backed up by evidence.

It is also a very contemporary way of addressing issues of productivity and wellbeing. The approach adopted by enlightened employers is no longer focussed on creating cultures and environments that do no harm, but rather on creating an environment and culture that fosters engagement, improves wellbeing, address stresses and pressures and helps them be more productive.

It is now common for firms to have well defined wellbeing strategies in place. Nearly half of UK employers have a strategy already in place and 60 percent of CEOs say that the mental health of employees is their top priority, according to the Employee Wellbeing research report for 2018 from the Rewards and Employees Benefits Association.

Biophilic design plays an important role in this regard, but it is part of the wider of how spaces are created to improve people’s health and wellbeing. Because so many firms are now addressing this question in increasingly sophisticated ways, as well as biophilic design we may be hearing a lot more about salutogenic design in the near future.

Salutogenesis is a term coined by the medical sociologist Anton Antonovsky and describes his research in the 1970s and 1980s into the links between stress and physical and mental health. He found that the traditional dichotomy people had applied between health and illness was not sufficient to describe the constantly changing continuum of outcomes people experience in their daily lives.

He derived the term as an antonym to pathogenesis which describes how ill health is treated after a condition has become evident.

He was particularly focused on how different people respond to the ubiquitous presence of stress. He noted how certain people not only did not suffer the ill effects of stress that others found disabling, but enjoyed good health in spite of it.

He explained this by suggesting that the issue was one of an individual’s sense of coherence, defined as “a global orientation that expresses the extent to which one has a pervasive, enduring though dynamic feeling of confidence that the stimuli deriving from one’s internal and external environments in the course of living are structured, predictable and explicable; the resources are available to one to meet the demands posed by these stimuli; and these demands are challenges, worthy of investment and engagement.”

He went on to conclude that ‘beyond the specific stress factors that one might encounter in life, and beyond your perception and response to those events, what determines whether stress will cause you harm is whether or not the stress violates your sense of coherence.’

According to Antonovsky the three factors that are essential for a sense of coherence are:

This subject has already been explored by designers and researchers but the current focus on wellbeing and design may mean that its real time is yet to come.

Alan Dilani, the Founder of the International Academy for Design and Health (IADH) and Co-founder of the journal World Health Design published a 2008 study into the link in the journal Design and Health Scientific Review, called Psychosocially supportive design: A salutogenic approach to the design of the physical environment, concluding that ‘while clinical practice focuses on treating illness, there’s also a raft of research to suggest that the quality of our everyday surroundings has a highly important role to play in sustaining wellness.’

This kind of research is laying the foundations for a new way of considering building and workplace design in a way that focuses on wellbeing outcomes. Indeed, many designers are already adopting this approach whether they understand the salutogenic principles behind it.

When they make the workplace more manageable in terms of activity based working, control over ambient conditions, the ability to relax, the provision of ergonomic products and access to natural light and fresh air, they are adding to an individual’s sense of coherence.

When they make work meaningful with a sense of community, an understanding of how an individual’s role affects the organisation and wider world and how the firm cares for the environment, they are adding to an individual’s sense of coherence.

When they make the workplace and work comprehensible with wayfinding clues, colour, branding, landscaping, acoustics and sightlines, they are adding to an individual’s sense of coherence.

Biophilic design has already achieved mainstream understanding and it wouldn’t be a surprise to see salutogenic design as the next idea to cross over.