Mobile forms in the workplace

The trend for ever-greater space densities, driven by increasing property costs is now passing and we will instead focus on the flexible structuring of floorplates and the creation of a range of work settings for different forms of work make acoustic and visual privacy more important than ever before.

Long before we became fully aware of large open plan offices and the Bürolandschaft and adopted them as the default design standard for modern workplace, generously proportioned floorplans exhibited the useful characteristics of being both adaptable and multi-functional. Anything architectural in its scale is largely immutable, fixed and impossible to adapt to the different uses asked of modern organisations, so fixed barriers in the workplace can quickly constrain its use. This is just one reason why workplaces as diverse as monastic writing rooms, Hanseatic trading posts and writing pools have adopted large rooms to deal with such inflexibility. As it is in a library, the quiet sharing of space makes it easy for people to work and ensures that the space itself is as flexible as it can be.

The desire to create separate rooms was a response to the clatter of typewriters and then computer keyboards, phones and the general backdrop of noise associated with modern workplaces. Employees became understandably and increasingly agitated with the noise, incessant interruptions, the unabated need to communicate with others and the constant call to join some new project team or other.
Meanwhile, life itself had become more nomadic in response to greater access to modern forms of communication and technology, and the backlash against the static work and lifestyle of the past was complete.

What was once a Chinese wall has now become something more prosaic; a simple screen or partition. Sedus offers a range of solutions to help define space that are both multi-functional and flexible as well as creating a visually attractive and even playful acoustic solution. 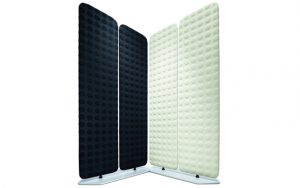 A linear space divider, viswall is a system offering exceptional acoustic and visual privacy which can also be specified in a polyester finish. Each of the slats can be rotated through 360 degrees so users can choose their own level of privacy. This means they can decide for themselves what level of confidentiality or solitude they need for the task in hand. By moving the floor tiles as needed, spaces can be reconfigured and new zones created to ensure exactly the right balance of privacy and openness.

A solid way to create a room within a room or create visual privacy, the acoustic wall system offers understated yet outstanding acoustic performance. Not only that, the panels can be used as works of art because it is possible to high quality print images and motifs on the textile upholstery. The design is as well-resolved as you would expect from Sedus with fastenings that allow the rapid installation and replacement of panels. The sound absorbent core of the screens is perfectly aligned with the frame and a number of elements can be joined together using simple fastenings. Guaranteed to free your ears of the ringing, rattling, chatter and footsteps. 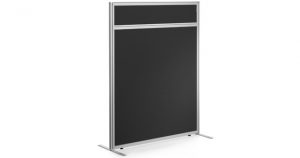 Timeless in design, sturdy in construction and flexible in function, Sedus partitions are equally suitable used as room dividers, angled walls or in more complex configurations. And the system is easy to change too. Available in a range of different heights and widths, each element can work as a standalone partition or in configurations of three or four. They can even work in conjunction with workstations, providing a third level of space above the desk for storage and organisational accessories. A selection of feet adds to their multi-functionality. Single screens are even available on casters. The panels can be finished in either upholstered or glazed options. 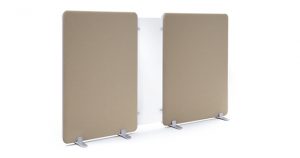 The unique combination of acoustics, design and functionality with an attractive price-performance ratio makes Sedus se:wall very impressive, especially when compared to conventional systems. It provides privacy, zoning and an acoustic screen while ensuring maximum functionality and flexibility with a wide range of products and numerous configurations – which can be customised, if desired. Don’t let the slim appearance fool you. The highly effective fillings comply with absorption class A.