Origins of the name ‘Sedus’

Last year, Sedus celebrated its 150th anniversary – which was 150 years marked by many milestones and pioneering thinking. Founded by Albert Stoll in 1871, the company has been family-owned for three generations. In the 1960s, the brand and the name Sedus were finally created.

Albert Stoll II died unexpectedly in 1937 at the age of only 54. He left the company to his four sons. For a short time it remained with an undivided community of heirs. The family eventually agreed that 28-year-old Albert Stoll III. assumed responsibility for operations in Koblenz, Switzerland. Christof Stoll, who was three years his junior, was given the opportunity to continue running the Waldshut business with the two other brothers. However, there were difficult times ahead for the family – the Second World War began and took its toll. One son Gustav, did not return home from the war and another son, Martin, became a prisoner of war and only returned home much later.

Three sons on their own paths

Three brothers and one company? Sometimes that works. But decision-making processes are harder to make, and over time it became apparent that the brothers wanted to go in different directions. In the post-war period, Albert Stoll III. developed his own chair models. Although they were still based on the torsion spring principle, his office chair developments began to differ from those of the parent company. In 1948 he introduced the brand name “Giroflex” and in 1956, he finally left the company in Waldshut. From then on it traded as “Stoll Giroflex” in Switzerland.

The brothers in Waldshut could now afford to develop their own visions and to think bigger and more independently again. Christof Stoll placed anthroposophical and ecological aspects in the foreground of his work and in 1953 introduced an employee participation scheme – which is still the case today. His brother Martin, on the other hand, was an aesthete. It was particularly important to him that the office furniture looked good. He focused mainly on the design aspect. Finally, in 1958, the two brothers decided that they wanted to go their own way. In the expanding company, the brothers built another plant in Tiengen, which Martin Stoll took over and traded under the name “Martin Stoll Stuhlfabrik” from 1977. Until 1999 he managed the company, which later took over the Swedish Kinnarps GmbH. In 2006, production in Tiengen was discontinued. 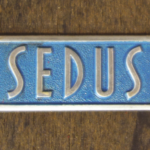 After the division of the family company, Christof Stoll also decided on a new name and gave his products the Sedus trademark. He generated the artificial word from the Latin verb “sedere” which means “to sit” – a name that henceforth stands for ergonomics, quality and innovation.

You may also find the following of interest: