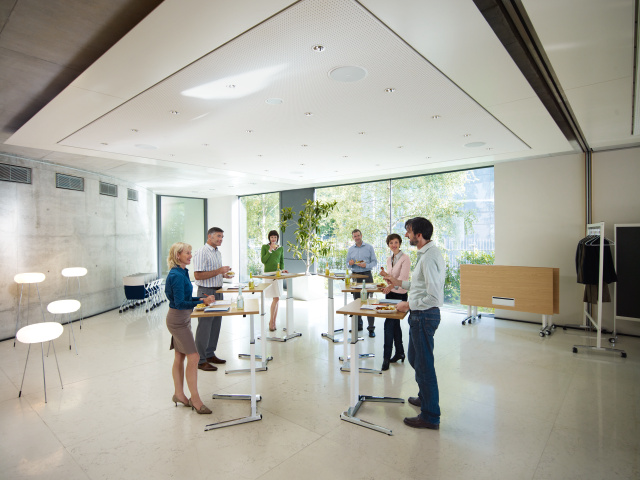 Sitting has acquired something of a stigma over the past few years, aided by the now widely shared idea that ‘sitting is the new smoking’. In many ways, a new focus for a debate about the links between the office environment and wellbeing is welcome but the truth is that we’ve been aware of the problems of sitting still in fixed postures for a long time.

However, it could also be argued that the issue itself had become ossified, in part because of official guidance on ergonomics set out in Display Screen Equipment regulations. Although these are still useful, they primarily describe one way of working – desk based with a PC. This has not kept step with the changes in the way we work and the devices we use, as well as our raised awareness of wellbeing and the role of workplace design.

The idea that sitting is the new smoking has morphed into a slogan, which means inevitably that it discards a great deal of nuance of the type actually needed for such a complex subject.

This is a shame because the specific wording appears to have come about first as a headline for an article in the Harvard Business Review in January 2013 and a subsequent Ted Talk by Nilofer Merchant. When you listen carefully to what she is saying, what is clear is that this is an informed, measured and nuanced take on the need for us to address the fact we spend too much time on our backsides staring at computers and other devices and in meetings.

She is saying that we need to sit less and move and vary our posture far more, not that there’s anything wrong with sitting per se.  She’s right and we’ve known it for a long time.

The scale of the problem

The scale of the problem, in the UK at least, is revealed in a major new study published in the Journal of Epidemiology and Community Health which claims that sedentary office life which involves sitting down in static postures for at least six hours a day contributes to tens of thousands of people dying every year.

The researchers applied a meta-analysis of the increased risks of heart disease, diabetes and cancer associated with extended periods of inactivity. They claim that about a third of British adults spend more than six hours sedentary each day. Their conclusion is that almost 70,000 deaths a year in Britain – over one in ten of total deaths –  could be attributed in some degree to the behaviour.

The good news is that they have some advice about how this might be addressed both in terms of behaviour and office design. They conclude that office workers must be encouraged to stand up every hour and spend free time walking to make up for the effects of period of fixed posture. Employers should allow activity breaks and address the fact generally that sedentary office work is a major health risk.

Leonie Heron of Queen’s University Belfast, lead author of the study, said the research “means that even if you meet the recommended levels of activity you are still at higher risk of some of these health conditions if you are spending long periods of time sitting down during the day. Although if you are active, you will attenuate that risk.”

“You need to put your body under a little bit of stress to maintain a healthy heart and whole system,” Ms Heron said. “It suggests that it is bad for our health how our working lives are structured for a lot of people. You can attenuate that risk by being more active in your leisure time, but it’s something employers can look at. Maybe they should be providing opportunities for employees to be active during the day, perhaps making sure people move every hour . . . or providing opportunities during lunch and coffee breaks.”

So, the important thing is that we remember to move more. In part this is a product design issue, hence the rise of sit-stand desks and the growing number of chairs that now promote ‘dynamic sitting’ or some or other variant of that term as pioneered for many years by Sedus.

But it is also a management and behavioural issue because, as well as sitting in a chair that allows or encourages us to change our posture, we should also remind ourselves (and be encouraged) to get up and move around regularly. It should be embedded in company culture and become part of everybody’s daily routine.

New workplace design methodologies can play a key role in signalling this culture and also embed movement into people’s daily routines. As we have highlighted before, we might look to schools and universities for models of how this works because students move from hour to hour to different parts of a building to work in other ways and with different people and to relax and play. So too can an activity based working model of the office embed movement into the daily routines of workers who might otherwise be drawn into the adoption of bad habits.

Promoting wellbeing and encouraging people to move is an issue that relies on the entire workspace, not just an individual’s workstation. It is about knowledge, culture and variety, not least when it involves working with contemporary technology. Not only do we need to train people to understand the importance of using technology in the most appropriate way, we also need to encourage them to develop good habits in the workplace.

This offers the dual advantages of getting bums off seats and encouraging informal encounters between colleagues. But most important in this regard is a culture that understands the complexities of wellbeing and striking a right balance between those moments in which we must sit to work and those in which we don’t.