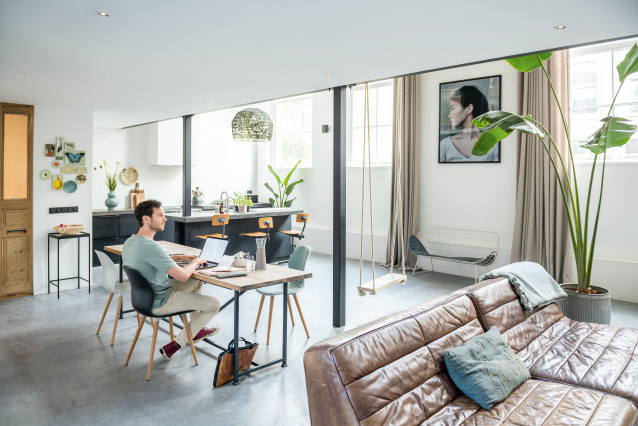 Why activity based working is an increasingly popular workplace solution

The language we use to describe work and workplaces evolves almost as quickly as the workplace itself. And if there is one term that encapsulates cutting edge workplace design thinking in this part of the 21st Century it is Activity Based Working (ABW). As with most of these ideas there is nothing magical, or even new about this. ABW merely describes a workplace that gives people a choice about how, when, with whom and where they work. In an office context, this means providing a choice of work settings, each designed for a different types of activity. So, it would typically include traditional workstations, a choice of meeting and collaboration areas and space for quiet working and confidential meetings zones as well as café and break out space.

Both inside and outside the office, activity based working is facilitated by technology and an open culture, which allows staff to work anywhere.

As we’ve pointed out before, none of this is new. The idea was first formalised as a workplace model in the 1980s, but the truth is that we’ve all experienced ABW settings before we even begin work, because it also describes how schools and universities are designed and run. The adults are playing catch up with the kids.

Activity based working can offer a number of advantages over more static forms of office design.

It is typically less expensive than a traditional layout because it is less reliant on dedicated workstations and so shifts the focus of the building away from occupancy and towards usability. This is characterised by a change of emphasis from efficiency to effectiveness and also a reduction in the amount of space taken up by a typical organisation.  It is even likely to be more efficient, given that desks in traditional office layouts are typically unoccupied for more than half of the working day.

Traditional workplace design models are typically associated with a phenomenon known as churn, which simply describes the cost of moving people in response to organisational restructures and changes. This is a problem that can never be completely eradicated but it can be reduced when individuals aren’t direct owners of a particular workstation or space. ABW is inherently more responsive to change because it is the people that move, more than the furniture and fittings.

Activity based working is the underlying principle behind the new generation of tech campuses that are springing up to serve the likes of Apple, Google and Facebook. It is also the basis for the award winning Sky Central offices in West London and a growing number of major corporate headquarters.

But its application is not limited to the giants of business. As we demonstrated with our recent work with Thames Water, it also has the potential to transform the working culture of smaller workplaces. In addition, it is endlessly adaptable to the needs of specific organisations, precisely because it offers a menu of settings from which to choose.

One of the major challenges facing people at work is the ability to work free of interruptions and distractions. Although there is a great deal of focus on acoustics, visual privacy is an important factor that should be addressed in a design.

Because activity based working provides a range of working spaces designed for specific tasks, like quiet spaces, focus areas and collaborative zones, it is better able to provide people with the chance to work in spaces that offer them time free of distractions.

Activity based working doesn’t just offer the right spaces for people to work collaboratively, it signals to them that it’s OK to move around and work with the people with whom you need to work. It also increases the likelihood of chance encounters and so not only improves the flow of information across disciplines, but also fosters the sorts of serendipitous moments that are essential in creative work.

The ability to work in an autonomous and flexible way is already one of the major attractions for talent. People are literally drawn to agile working environments that allow them to decide for themselves the best way to get things done. And, of course it helps organisations to retain the best weapons they have in the war for talent.

Because an activity based working environment typically utilises significantly less office space than a traditional model of workplace design, its smaller footprint goes hand in hand with a smaller carbon footprint.

The ability to move around the workplace inevitably has a number of benefits for wellbeing, not least the chance to change posture and surroundings and address the problems commonly associated with sedentary work.

Autonomy is also an important factor in fostering wellbeing and productivity. In their seminal work looking at the Six Killers Variable of Productivity, the number one factor they list is Comfort and Personal Control.